Founded in September 2003, Dynamsoft is now 10 years old. Happy birthday! Throughout the first ten years, Dynamsoft has grown a lot with hard work by all employees. And, of course, we couldn’t have accomplished our growth without continued support from all customers. We are grateful to our employees and our customers for their dedication and help in making Dynamsoft a success. When you reach a decade-long milestone like Dynamsoft has, it’s important to reflect upon the journey that got you here to maximize successes for the journey ahead. Here’s a quick look back. 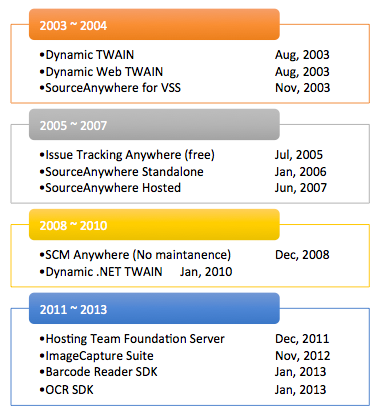 Dynamsoft continues to aim to be a dynamic center for software developers. To this end, our product lines continue a focus on source control and TWAIN/imaging SDKs. We’ve made many product updates in 2013 alone to continue to address our customer requirements for advanced source control and image capture application solutions. We look forward to another 10 golden years with our employees and working closely with our customers. Again, we are sincerely grateful for your support during our first 10 years of growth.